Which are the best countries for software engineers?

Over time, the world is experiencing a global surge in the demand for Software engineers as technology continues to define and shape the world.

Hence some countries are beginning to put in the effort to create easy and fast visa processes, low taxes for tech talent, and other benefits in order to attract technical expatriates to their country.

Comparing the datasets obtained from Google trends, Payscale, and Indeed, we can find that the top countries for Software engineers have not changed much over time.

The United States of America (USA), Germany, Denmark, Norway, the Netherlands, Finland, Israel, Australia, and the UK are unarguably some of the best places to work as a software engineer. But, What is the average earning power of software engineers in these countries? What skillset or tech stack gets more pay?

The basis of the conclusion:

However, this conclusion is liable to your personal preferences. Considering some factors such as language barrier, weather conditions, are also important in this context.

Is the USA a good place for software engineers?

The USA is one of the most popular places in the world best known for its military strength, economic dominance, and technological innovations. Making it one of the best destinations for a Software engineer.

Average salary structure for software engineers in the USA

According to the job hierarchy.

From the chart above, you can deduce the following:

Is Germany a good place for Software engineers?

Germany is an incredible place to be as a software engineer. Cities such as Hamburg, Stuttgart, and Munich house some of the biggest tech companies and startups.

Berlin, the capital of Germany which is often considered the Silicon Allee in the tech community is home to big companies such as Facebook, Google, Microsoft, and successful startups such as Uber, N26 and a host of others also has a good foothold in this country. Hence, Germany is never the wrong place to consider for migration for Software engineering work.

The demand for developers and software engineers in Germany is always high, which can be tracked by IT  jobs actively posted on job search websites.

According to the job hierarchy.

Let’s compare the earnings of different tech stacks in Germany. 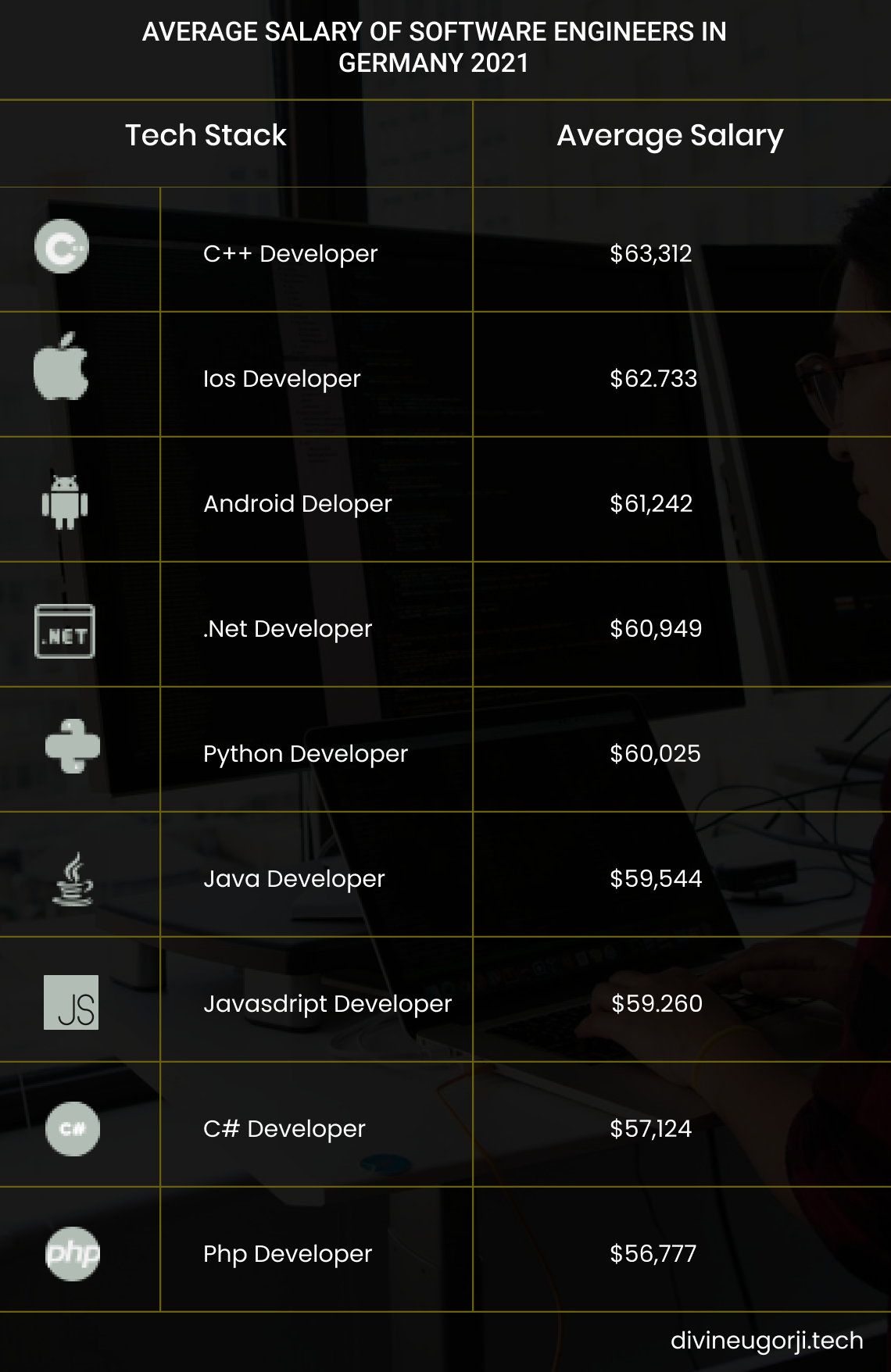 Apart from high payment, you can also enjoy the following while working with German firms:

Is Switzerland a good place for Software engineers?

Switzerland is an amazing country with beautiful scenery. The amazing mountains, heaps of lakes, and beautiful villages make Switzerland stand out as a good destination for living.

Switzerland is considered the highest paying country in Europe. This makes it a good place for Software engineers to settle and work.

On average, Software engineers in Switzerland are paid about CHF 84,934, according to PayScale.

According to the table above, we can deduce that software engineers in Switzerland are fairly well paid.

Is Denmark a good place for Software developers?

Denmark is a beautiful country well known for its outstanding and high-quality design and architecture, housing the happiest people on earth. This country is a really good to live and work as a software engineer because of the relative peacefulness and coziness this country offers.

Depending on experience level, a Software engineer in Denmark earns about DKK 443,273 per year. Copenhagen, the capital of Denmark pays more for Software engineers at the rate of  DKK 527,184 which is more than the national average, according to Glassdoor.

From the table above, we find that the top languages that predominate in this country are Java, C#, C++, .Net, and Javascript.

Is Norway a good place for Software engineers?

Norway is a land of phenomenal natural wonders. This country is well known for its midnight sun, magical skies, phenomenal fjords, lakes, oil production, and for being eco-friendly.

This is definitely a place to enjoy life well.

Bonus: Top 5 countries to live in and work remotely

Thailand:  Thailand is one of the best places to live in and work remotely as the cost of living is quite good and affordable. The cost of living ranges from  $787.71 to $998.66 per month with an average internet speed of 22 Mbps.

Iceland:  Iceland has a Work in Iceland program which permits remote workers to live and work in the country for up to six months. Bloomberg states that one must be making at least  $88,000 annually, to be able to travel here on a Nomad visa, having proper health insurance through working for an ice-land company or doing remote work.

Singapore:  This country is quiet and beautiful with a serene environment as well as open for remote workers. The cost of living here is about $2,564.20 per month on average. The internet speed here is about  89 Mbps, which is moderate for a good remote working experience.

Maldives: This country is one of the best countries for software engineers for remote working. The cost of living here per month is about $1,120.78, while the internet speed stands at about 4 Mbps, with a minimal number of activities.

This means you get a relatively quiet environment to do your work and also enjoy some good time with the vibrant culture the country is well known for.

Estonia: Digital Nomad Visa in Estonia permits remote workers to live and work in Estonia for up to one year in the northern part of the country. This visa usually costs about $94 and $117 and that is if you plan to stay long in the country.

To obtain this visa, one must have to reach a gross income requirement of $4,130 per month for six months period before their application which is proof of employment as a freelancer or gainful employment in a company or business registered outside the country.

One important point here is that Estonia, just like some other countries in the European Union, is not

accessible to most Americans at this time.

Which country is best for you
as software developer?

The choice of the country to migrate to depends on what you really need. If high payment is a major concern for you, then you should consider moving to places such as the United States, UK, and Denmark as Software engineers are paid considerably higher in these countries.

However, if living in a serene environment more than good pay is a top priority for you, then consider settling down in countries such as Denmark, Germany, Switzerland, and the Netherlands.

But if you ask me, I would say that the best country for a Software developer to live in is one where s(he) can find peace. If you already have this,  it would enable your work/life balance immensely.

However, if you’re looking to explore or just to get the experience working abroad, then I believe that our list in this article would enable you to make a fine decision of where to migrate to as a Software engineer.

From our research, The USA, Denmark, Switzerland, Netherlands, and Germany, made it into our top list as good destinations for software engineers. And as stated before, this is not an absolute list and the choice of where to migrate is completely in your hands.

BEST 7 REASONS WHY YOU SHOULD BECOME A SOFTWARE DEVELOPER